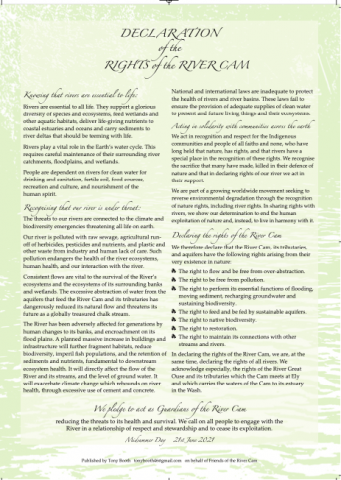 The declaration of the rights of the Cam at 6pm by ninety of us, pledging to become the guardians of the River was the serious centre point of a celebration that lasted between 4pm and 7.30. There was music, poetry, creation of river pictures, and a wish tree for the river.

It was a cloudy day with some light drizzle from time to time but the atmosphere was joyous and a samba band was always ready to up the mood. The rain was helping to sustain the river and perhaps was already part of the river even before it fell.

From time to time people spoke of their connection to the river. Paul Powlesland, barrister and environmental activist and founder of Lawyers for Nature, joined us to talk of the need for nature rights and a push to change the lack of balance in the law away from environmental polluters. Junayd Islam, representing the Schools' Eco Council told of his shock when he discovered the difference between how chalk streams are meant to be and how the Cam is now.

Among a number of powerful poems, there were some intriguing erasure poems created by progressively paring down a piece of text from 'Anglian Water's Pollution Incident Plan' to reveal something more life-affirming.  There was some poetic justice in trying to remove polluting phrases from the company responsible for frequent dumping of raw sewage into the Cam.

At 6pm we stood in distanced concentric circles to read the declaration together. We recognised that in declaring the rights of our river we were at the same time declaring the rights of all rivers. We knew we were part of a long tradition of respect for rivers shown by Indigenous peoples around the world. We connected the plight of our river to the climate and biodiversity emergencies and drew attention in particular to threats to its health and survival from over-abstraction, pollution from many sources, and the encroachment of massive unsustainable growth in building and infrastructure putting an  impossible strain on water supply. We declared the right of our river: to flow and be free from over-abstration;  to be free from pollution; to be fed by sustainable aquifers; to perform essential functions within its ecosystems; to native biodiversity; to restoration; and to maintain its connections with other streams and rivers.

Towards the end of the occasion a few exuberant people took to the water. We aim to create a cleaner, natural flowing river, a restored and nationally treasured chalk stream, for future generations. This is their right, our right and the river's right too.