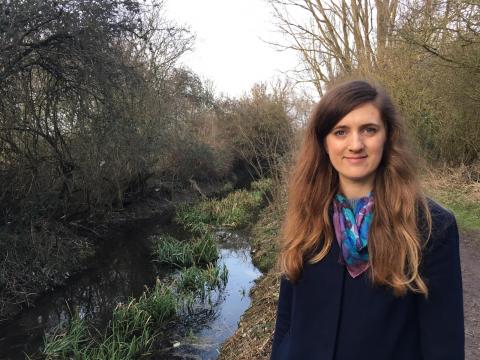 Hannah Charlotte Copley is a local doctor, climate activist, poet and Green Party City Councillor, who recognises the climate and ecological emergencies as the greatest impending threat to human health the world faces today. She wrote this spoken word poem for the Friends of the Cam Declaration of the Rights of the River Cam to express her feelings about inaction in the face of climate breakdown.

Drink the air with me - Hannah Charlotte Copley

You call me disillusioned: no,

I am nauseous, furious and provoked.

Watching this restless discharge of fatigue,

From a body twisted by the self interest of the powerful,

I say to you: Sit with me, look at this growth media of life, the river beside us,

This is the start of an artisan-republic, the creation of our midnight-bread,

As we soothe the deep textured wisdom of her chalk stream source.

I say to them: Stop.

Do you see what you’re doing? Can’t you say sorry?

I want to thump the table: the transcript is wrong,

It was written before the meeting even happened.

This is not a community drama.

I say to them: Stop,

She is our honey-family, our vitamins and corn,

You have pushed her to the thermostat breakpoint,

Don’t tell me it will be ok, it will not be ok,

I want to take you to the deepest darkest forest and show you the damp green moss,

Whose arms twist up to the soul-giving light with dewdrops clinging on,

While animals watch us with reverence and respect,

Respect we must return.

So come and dance with me in an ellipse with your lashes wide open,

Come with me and drink the air like it’s your last chance,

Join me in a solemn commemoration of mother earth then wake up and fight.

She is suffocating under the dereliction of duty of those who are supposed to protect her.

I say to you: We are alive, at this most critical point for humanity,

Convert the bad rules you are following from the pseudocode called economic growth,

Into a clean universal slang,

End this cigarette championship where making money is the only thing that matters.

I say to you: our relationship is broken, we are abusers,

We are causing this aftershock,

Find yourself a compassion academy.

I am not disillusioned: no,

I am nauseous, furious and provoked.

Declaration of the Rights of the River Cam